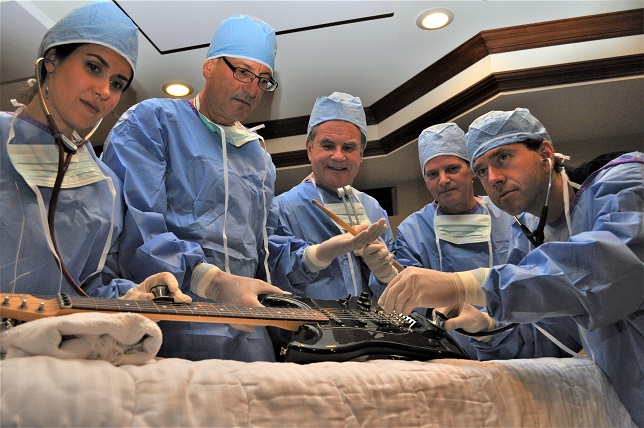 We often hear about the “Joy of Giving”, although not all experience this joy as deeply as the members of Monmouth County’s own Docs of Rock. Six years ago, a few acquaintances with time-consuming careers by day found an outlet for their love of making music. What started as casual sessions solely for their own enjoyment, evolved into a talented band performing for area charitable organizations. Appreciating the significant cost of musical entertainment for these events, the Docs of Rock realized they could make a meaningful contribution to the community and also have an outlet for their creativity. Docs of Rock donates its performances and so far, the band has supported more than a dozen organizations which collectively have raised about three million dollars. Readers may recognize the band members from their daytime careers: Larry Sykoff, Ed.D, Headmaster Emeritus, Ranney School; President, LSS Consulting Group, on guitar; David Lessing MD, Orthopedic Surgeon, on bass; Scott Woska, MD, Pain Management Specialist, on keyboards and sax, Ken Grossman, MD, Dermatologist, on drums; Gina Dinnocenzio, RN, vocals; Diana Smith, Veterinarian Technician- Oncology, vocals; and Brian Incremona, MD, Internist, vocals. The youngest member, Evan Woska, 11th grade Ranney class president, adds electric violin and sound engineering. And as satisfying as those daytime endeavors are, the band members derive great joy from their artistic sides too.

It all began with Dr. Sykoff’s day-job and Ranney School fundraisers. “I had the privilege of playing guitar on several occasions at the Stone Pony with Bruce Springsteen as part of the school fundraisers Bruce hosted for parents and faculty,” said Dr. Sykoff. “At these performances, he would introduce me as the “Doc of Rock” — the origin of the band’s name. As good fortune would have it, I learned that one of our Ranney parents, Dave Lessing, was a bass player who also loved music. We decided to jam to see what we sounded like as a duo.”

Next to join the jam sessions was Ken Grossman on drums. The trio met at Dr. Grossman’s home so regularly that the space became affectionately referred to as “Ken’s Basement.” Scott Woska on keyboards and sax was the next doctor introduced to the band, yet another Ranney School parent. Dr. Woska was assisting in the school’s music program, offering his talents in classical and rock music. He was invited to “Ken’s Basement” and the band reached a new level. “It didn’t take long for us to realize that Scott’s participation was going to be a pivotal moment for the emerging band,” said Dr. Sykoff. “With the addition of Scott, the Docs of Rock was really born. His skill and leadership was indeed the tipping point.”

The Docs of Rock play a variety of cover songs, always encouraging the audience to join in, dance, and sing along. And they do— including a visit on stage by Bobby Bandiera at one of the events. Band members each have a take on the music, and personal favorites have an influence.

Dr. Lessing said the band mostly performs classic rock and R&B, but noted his favorite artist is Joni Mitchell. “As a composer, lyricist, performer, and painter she stands alone on the steps of Valhalla,” adding, “We are always listening for new songs that groove.” Dr. Grossman revealed, “My favorite genre of music is actually Broadway show music, with classic rock a close second.”

When asked if the band plays original songs, Dr. Sykoff responded, “We are a cover band primarily, but the idea of writing our own music has always crossed our minds. It remains an aspirational goal. Scott (Woska) has written music in the past, and it would be his musical talent that would lead the band into this new undertaking.”

Particularly unforgettable to the band are the annual performances for the Zilinski Foundation – an organization dedicated to supporting wounded veterans and providing them with trained support dogs. 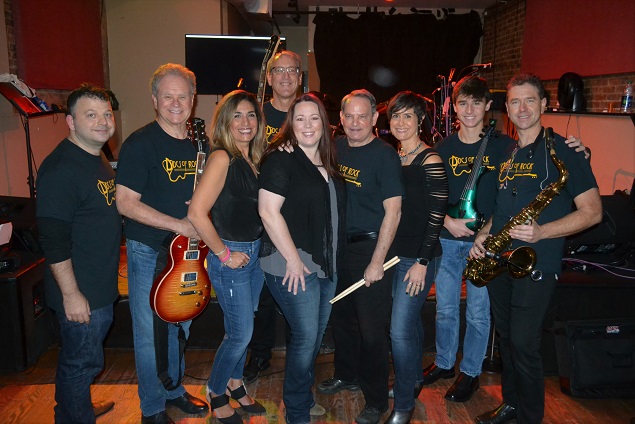 “At each of these galas with 350 plus guests, we meet wounded veterans coping with all kinds of devastating disabilities, slowly working their way back into civilian life,” said Dr. Sykoff. “Participating with the Foundation to help raise money to support these veterans manage overwhelming medical expenses is an unforgettable experience. Knowing our efforts help these veterans recover from both the complex physical and emotional wounds of combat remains the most memorable experience.”

An event performed last month is especially close to their hearts and a very different format for the group. “We embarked on an unusual and special technological project,” explained Dr. Woska. “We unfortunately lost our singer Erin Patrick to cancer three years ago. She was with us from the very beginning and is very special to us.”

Dr. Lessing brought Erin to the band having met her when his daughter and Erin sang in a high school choir together. He expressed how meaningful this event was to them all. “The Docs of Rock performed a special tribute to honor Erin’s talent and spirit along with the Monmouth County SPCA, a charity she supported. Using computers, screens, video footage and studio recordings we attempted to bring Erin ‘back to life’ as she sang ‘live’ with us on stage for her family and friends and supporters of a great charity.”

Looking back on the last six years, Dr. Lessing reflected how he feels the power of music is well known yet poorly understood. He refers to himself as “grateful” for being able to “channel that mysterious and joyful energy from the stage to the dance floor.” Dr. Sykoff, speaking for the band added, “The Docs of Rock has become a charity band giving back to our community by supporting worthy causes that improve the lives of others. Many underserved and isolated people living in our community are in desperate need of the services. These non-profit organizations provide social, emotional and psychological sustenance and, most of all, hope. Combining this humanitarian commitment with our love of music remains an opportunity for which we are forever grateful.”